So much has been written about the Occupy movement, it’s difficult to discuss it further without a sense of redundancy. At the same time, it’s difficult for the apolitical to fully appreciate the scope of the protests without understanding the motivation behind it.

It’s also difficult to examine the #OccupyCalgary movement without first studying the original cause.

Below are snippets of some of the best analysis / commentary:

“It remains to be seen whether the Occupy Wall Street protests will change America’s direction. Yet the protests have already elicited a remarkably hysterical reaction from Wall Street, the super-rich in general, and politicians and pundits who reliably serve the interests of the wealthiest hundredth of a percent …  (the) people who got rich by peddling complex financial schemes that, far from delivering clear benefits to the American people, helped push us into a crisis whose aftereffects continue to blight the lives of tens of millions of their fellow citizens.

Yet they have paid no price. Their institutions were bailed out by taxpayers, with few strings attached. They continue to benefit from explicit and implicit federal guarantees — basically, they’re still in a game of heads they win, tails taxpayers lose. And they benefit from tax loopholes that in many cases have people with multimillion-dollar incomes paying lower rates than middle-class families.”

“Barack Obama is many things but he is as far from left-wing populism as any Democratic president in modern history. True, he once had the temerity to berate “fat cats” on Wall Street, but that remark was the exception – and subsequently caused him endless problems on the Street.

To the contrary, Obama has been extraordinarily solicitous of Wall Street and big business – making Timothy Geithner Treasury Secretary and de facto ambassador from the Street; seeing to it that Bush’s Fed appointee, Ben Bernanke, got another term; and appointing GE Chair Jeffrey Immelt to head his jobs council.

Most tellingly, it was President Obama’s unwillingness to place conditions on the bailout of Wall Street – not demanding, for example, that the banks reorganize the mortgages of distressed homeowners, and that they accept the resurrection of the Glass-Steagall Act, as conditions for getting hundreds of billions of taxpayer dollars – that contributed to the new populist insurrection.”

“The frustration in America isn’t so much with inequality in the political and legal worlds, as it was in Arab countries, although those are concerns too. Here the critical issue is economic inequity. According to the C.I.A.’s own ranking of countries by income inequality, the United States is more unequal a society than either Tunisia or Egypt.

-The 400 wealthiest Americans have a greater combined net worth than the bottom 150 million Americans.

-The top 1 percent of Americans possess more wealth than the entire bottom 90 percent.

The banks have gotten away with privatizing profits and socializing risks, and that’s just another form of bank robbery.

‘We have a catastrophically bad misregulation of the financial system,’ said Amar Bhidé, a finance expert at the Fletcher School of Law and Diplomacy at Tufts University. ‘Its consequences led to a taint of the entire system of modern enterprise.’

Economists used to believe that we had to hold our noses and put up with high inequality as the price of robust growth. But more recent research suggests the opposite: inequality not only stinks, but also damages economies.”

Other notable supporters of the movement include Bank of Canada governor Mark Carney and renowned economist  Jeffery Sachs (video).

Although the #OccupyCalgary demonstrators voiced their solidarity with the American people, the Calgary ‘occupiers’ were generally more concerned about the issues here at home.

Among the issues discussed were an income gap widening faster than that in the U.S, a government whose ‘austerity’ measures conveniently overlook corporate welfare while slashing key governmental agencies, and an electoral system that awards a ‘majority’ to a party which garnered just 40% of the vote.

It seemed more an #OccupyParliamentHill movement than an #OccupyCalgary one.

Nearly all in attendance were content Calgarians who were happily employed, representing, among others, the financial and oil sectors, health care and education industries, and student body. Even the police in attendance were happy to count themselves as the 99%. After all, they *are* part of the public sector. They are also unionized. This makes them part of the Horrible Terrible No Good Very Bad ‘union thugs’ and ‘public sector leaches’ Conservative politicians (and media) regularly villainize.

What impressed me most about the #OccupyCalgary demonstration was the overall friendliness, politeness, and respect displayed by all in attendance. There were no instances of vandalism or violence; no abuse or disrespect shown to the authorities present.

Following the events at Bankers Hall, the protestors marched down Stephen Avenue toward Olympic Plaza, where they held a general assembly and set up camp, vowing to remain as long as they’re permitted.

Further reading: Parsing the Data and Ideology of the We Are 99%

Below are some of the images I captured over the course of the day. 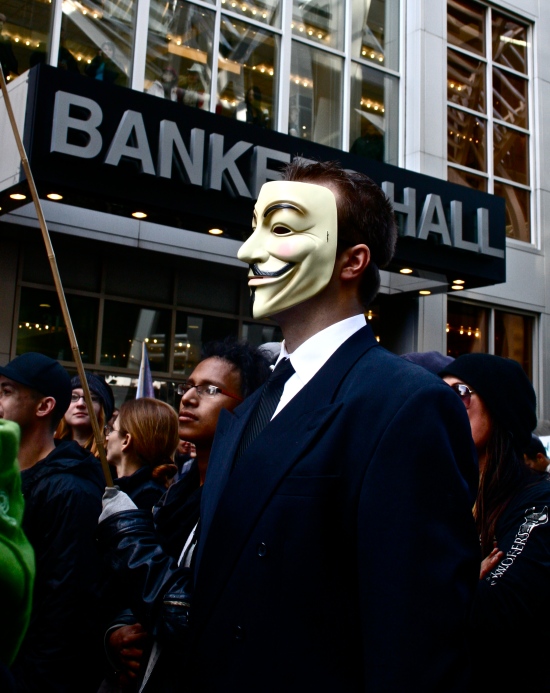 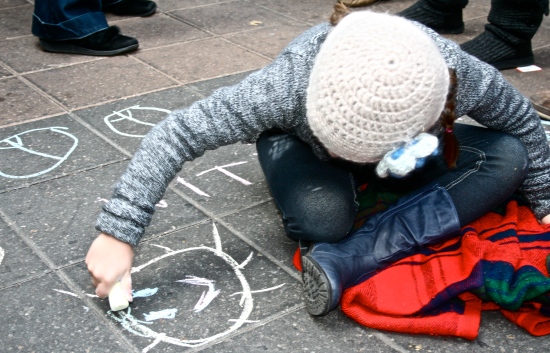 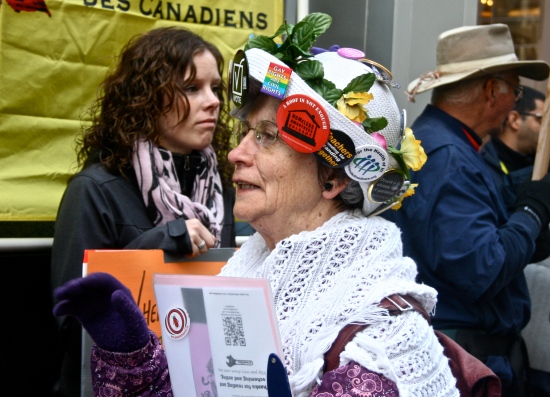 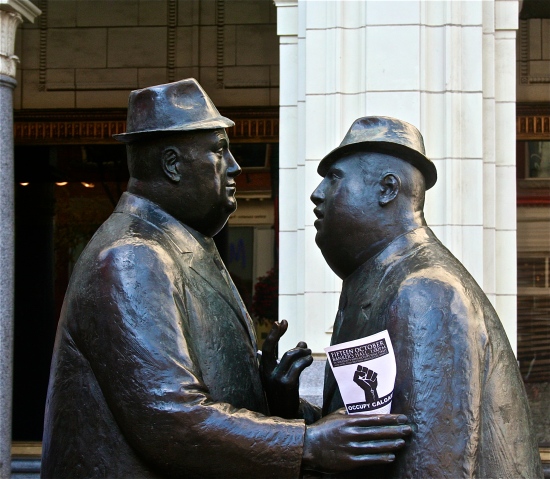 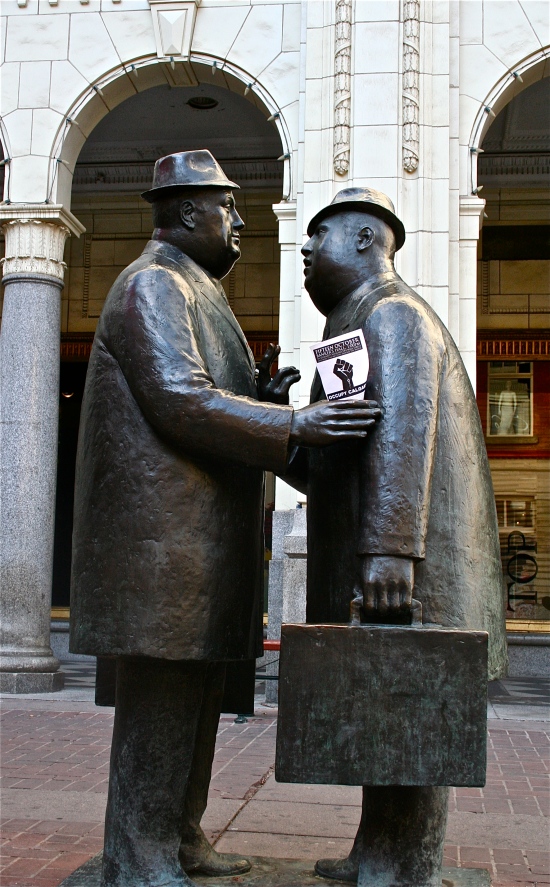 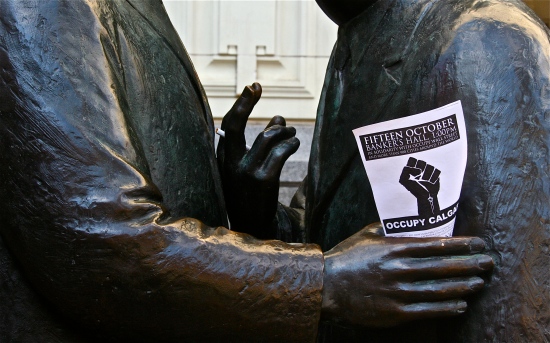 Collaborative features and investigations can be found HERE

If you find value in my work and would like to support what I do, you can contribute HERE

Looking for something specific?